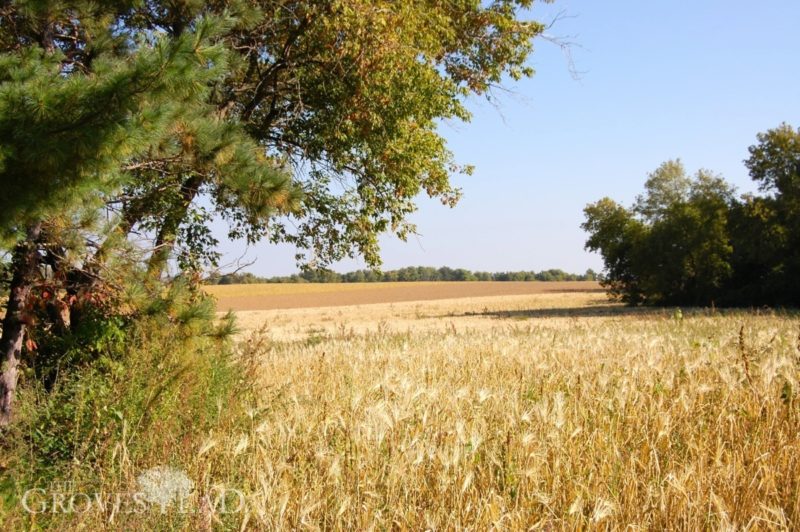 When we moved to The Grovestead, half the property was being rented to a neighboring farm. I usually don’t turn down free money. But in this case, 8-foot tall cornstalks made it hard to enjoy our land. We also didn’t know what chemicals or fertilizers were being sprayed or if the soil nutrients were being depleted–not uncommon for rented farmland.

So we decided to stop renting the land and start farming it ourselves. The only problem: we didn’t know what we wanted. The field is too small for row cropping, too big to leave be. We wanted to replenish the soil but still have access to the land and enjoy it. We thought about putting in an orchard or grazing sheep. But not sure exactly when or if. In short, we needed more time to make up our minds.

A friend suggested planting alfalfa. It was in demand, should be easy to sell. And one planting could last 3-5 years. But due to the Long Winter and desperate search for a farmer to work such a small plot, our seeds didn’t get planted until way late in the season. Of course, to be followed by a drenching rain that washed out half the planting.

By the time of our first cuttng in the Fall, the farmer who was helping us shared the bad news that we would likely have to replant next year. This was hard to swallow given the substantial amount of money we had invested. There’s the seeds, the labor to plow, plant, and harvest the field. It all adds up. But we were expecting to recoup this cost over the next 3-5 years. The thought of replanting one year later was dispiriting.

I told him, “I went from making money renting my land to losing money farming it.” He laughed and said “Welcome to farming!”

So we’re replanting this year. The whole field will have to be tilled up again. Instead of alfalfa, we’ll put in pasture grass which is a more versatile crop than pure alfalfa. We can sell to our horse-owning neighbors. If we get animals, we’ll have pasture for grazing. At a minimum we’ll have a scenic few acres to enjoy.