I have a story to tell, and I think it sums up our family better than any other story I can think of.

One afternoon in June, Rory and I were on a conference call getting things organized for the Grovestead Gathering. While we were on the phone, Rory’s dad pulled up the lane, tugging his boat, back from a day of fishing with Ivar. I ran out to greet them and explained that we were on a call. Papa said it was a great day fishing and he needed to get going.

After he drove off, Ivar showed me a five gallon bucket full of sunnies, crappies and bass. He was beaming. And it became clear that our afternoon had just turned into a lesson on cleaning fish. Rory pulled up a video on “how to clean a sunny” and as Rory got his hands dirty, learning with each cut, he’d tell me, “back that up fifteen seconds. I need to see where he made that cut.” By the end of the bucket, he and Ivar were skilled fish cleaners.

I turned saltines into bread crumbs and dredged all the fillets, made a tartar sauce out of my Aunt Louie’s pickles, and we feasted and celebrated Ivar, who “fed the family! You brought dinner home!”

And then it began. While cleaning up dinner, Rory looked at the bucket of fish parts with all those eyes staring up at him. “You know, the native americans used fish to fertilize their crops.” And because I have been married to the man for a decade-and-a-half, I knew where we were heading next.

Within minutes Rory had found sweet corn seeds, read up and informed us, “it’s called a Three Sisters Garden! We’ll plant the corn in mounds…” and all seven of us found ourselves in an unplanted section of garden next to the pumpkin patch, raking the earth into heaps, “six feet apart.”

“Ivar, you dig a hole in each mound and drop in the fish heads. Elsie, plant six corn kernels in a circle near the top of the mound.” Rory texted a group of homesteading friends, “anyone have vining bean seeds left? Or squash?”

By the time he was off to a meeting 20 minutes later, we had planted a new garden.

A few weeks later I went out before church and planted the vining bean seeds in the middle of the corn shoots. And then planted squash seeds in a circle around the corn.

It really is an awesome garden plan. The vining beans use the corn as their trellis and don’t harm the corn at all. And the squash serves as a ground cover against weeds for the corn. The three sisters: corn, squash and beans all do their part and benefit the other.

And don’t forget the fish heads.

All summer long we have been watching this favorite part of the garden. We only had two vining bean seeds germinate, so it wasn’t a total success, but this garden was SO FUN! And it all came about because Ivar went fishing and Rory couldn’t waste all those precious fish parts.

And much to our surprise and delight, the squash seeds that my friend gave me were banana squash. When she handed me the baggie she said, “those get real big.” Which is a hilarious understatement. Watching these squash grow was a total joy. We kept saying, “look what those fish did to the soil! Our produce is supersized!”

And it is worth mentioning, the squash is delicious! It is very similar in taste to an acorn squash, but not stringy, more like a butternut squash in texture. We roasted our first squash in sections and then cubed it in homemade chicken noodle soup. It was amazing!

The metaphor of the Three Sisters Garden was never lost on me, each item benefiting the other. Family works the same way. In this instance, Rory had a sudden idea, we all got on board and helped execute, doing our different jobs. We learned a lot along the way, and now we all will feast on all of that good work.

As we like to tell the kids, “Hard work tastes delicious!” 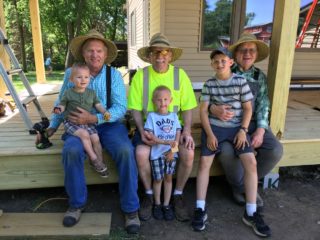 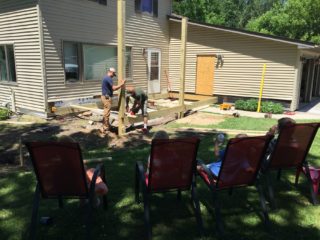 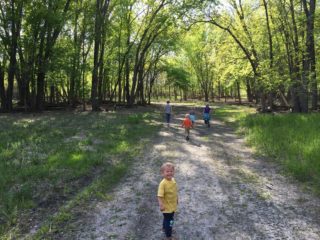